skip to main | skip to sidebar

The study attempted to connect the neuromodulator oxytocin with increased generosity by showing that it increases perspective-taking or empathy.

To isolate oxytocin’s impact on perspective-taking, the researchers used two money transfer tasks, the Ultimatum Game and the Dictator Game

Ultimatum Game: In the Ultimatum Game, the Giver was asked to choose an amount of money to transfer to the Receiver. If the Receiver accepted the transfer, both partners got the agreed-upon amounts of money. If, on the other hand, the Receiver rejected the offer as too stingy, neither partner kept any money. The Giver only had the opportunity to make one offer and could not renegotiate.

Dictator Game: In the Dictator Game, the Receiver had to accept whatever amount of money was given to him by the Giver.

The Ultimatum Game differs from the Dictator Game in that, in order to succeed at the task, the Giver must think about what the Receiver will do. The researchers encouraged this by asking all participants, before they were assigned to particular roles, to think about both the amount they would transfer as a Giver and the minimum amount they would accept as a Receiver. In the Dictator Game, the Giver does not need to explicitly think about the Receiver, but instead “simply decides how much one would like to give up.”

Before completing these tasks, half of the participants were infused intranasally with oxytocin and the other half were given an intranasal placebo to see what effect oxytocin would have on decision-making in the two games.

The average transfers in the Ultimatum Game were $4.86 for the oxytocin group and $4.03 for the control group.

The researchers distinguished between generosity and altruism.

Generosity: Liberality in giving. Offering more to another than he or she expects.
Altruism: Helping another at a cost to oneself.

In the Ultimatum Game, significant generosity is shown by participants who have taken oxytocin, meaning that these participants gave more than the average amount that people would be willing to accept as a Receiver. Those who had taken oxytocin were 80% more generous. 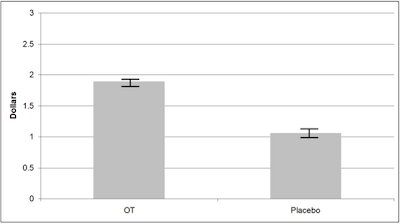 From this, the researchers concluded that oxcytocin increases generosity, but not altruism, by increasing participants’ ability to take on the perspective of another person. The researchers hypothesized that when participants in the oxytocin group thought about the Receiver while acting as Giver in the Ultimatum Game, they identified more strongly with the disappointment and negative emotions that the Reciever would feel if the transfer was small, and so they gave larger amounts. The paper states, “OT [oxytocin] appeared to have selectively affected the understanding of how another would experience a negative emotion, and seemed to have motivated a desire to reduce DM2s’ [Receivers’] experienced negativity. This could be called empathy.”

An Alternative Reading of the Data:

Another explanation for the effects of oxytocin in the Ultimatum Game could be that oxytocin decreases risk-taking behavior. Givers who have received oxytocin might give more because they prefer to secure a smaller amount for themselves than to risk having their offer rejected and getting nothing. This explanation is not likely, however, because oxytocin did not have any effect on the minimum offer that participants were willing to accept as Receiver. If oxytocin led to risk-aversion, Receivers would also be willing to accept smaller, secure amounts, rather than sticking to a higher acceptance threshold. Also, another experiment, primarily designed to study the effects of oxytocin on trust levels, showed that oxytocin does not affect risk-taking.

The end of the Discover article raises the spectre of casinos filling the air with oxytocin to make people gamble more. As I just stated, the actual study suggests no link between oxytocin and risk-taking. The increased payouts in the study occurred only when participants were induced to actively think about the person who would benefit from their giving. This would be helpful to casinos only if people pulling the slot machine considered how the casino owner would feel about receiving their money—an unlikely scenario. The Discover comment is purely sensationalist.

What is Oxytocin Anyhow?

Oxytocin is a neuromodulator which is primarily known for its involvement in female reproduction. It is critical to birth and breastfeeding. Recent research has discovered that it is also very important in regulating social interactions. One study showed that mice with a mutant gene that prevented them developing oxytocin receptors lacked social memory. The connection between oxytocin and sociality is supported by the fact that areas of the brain that deal with emotions and social behavior tend to have more oxytocin receptors. These areas include the amygdala, hypothalamus, and anterior cingulate.

In a recent study, participants decided whether or not to make donations to social causes while undergoing an fMRI. The study found that, when participants chose to make donations, the mesolimbic-striatal reward system was activated in the same way as when participants were given monetary rewards. This accounts in part for the positive feelings associated with giving. In addition, participants making donations showed activation in the subgenual area (including Brodmann’s area 25) which was not activated while receiving money. This area is important in social attachment and affiliation. It is also involved in the release of oxytocin, suggesting that oxytocin has an effect on making decisions about donations. This reinforces the link between oxytocin and generosity.

(a) Mesolimbic–striatal reward system, including the VTA and the dorsal and ventral sectors of the striatum (STR), activation for both pure monetary reward and noncostly donation (conjunction of pure reward vs. baseline and noncostly donation vs. baseline). (b) Subgenual area (SG) activation for decisions to donate (conjunction of costly and noncostly conditions) as compared with pure monetary reward. The subgenual area comprised the most posterior sector of the medial orbitofrontal cortex and the ventral cingulate cortex (BA 25) and the adjoining septal region structures. (Caption taken from Moll, J., et. al.) 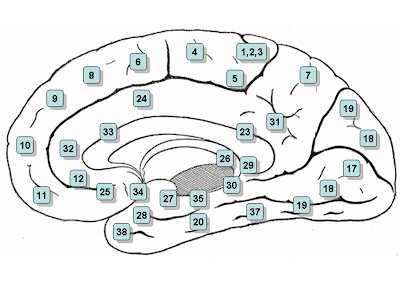 Area 25 was activated during the donation task, and is involved in the release of oxytocin.

Another study examined the effects of oxytocin on the amygdala. Participants were given either oxytocin or a placebo intranasally. Then, while undergoing an fMRI scan, they viewed angry and fearful faces and threatening scenes. For those who had received the placebo, this caused a large amount of activation in the amygdala. Those who had received oxytocin showed significantly less activation in the amygdala, suggesting that oxytocin can interfere with fear responses. The authors of “Oxytocin Increases Generosity in Humans” suggest that interference with the amygdala by oxytocin may make people less anxious about resource scarcity, and therefore more likely to give larger amounts in the Ultimatum Game. Another study has shown that oxytocin increases people’s willingness to trust strangers. This effect could be attributed to decreased activity in the amygdala inhibiting normal fear of betrayal. 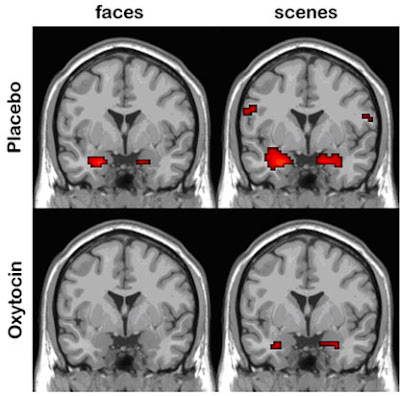 As the role of oxytocin in regulating social behavior comes to be better understood, it could be involved in new treatments of social disorders. The connection between oxytocin and perspective-taking indicated by this study may be of particular importance to autism researchers.

Barone, J (2008) Can the hormone oxytocin drive us to be more generous? Discover. Retreived February 21, 2009, from http://discovermagazine.com/2008/apr/04-a-dose-of-human-kindness-now-in-chemical-form